A single parent of a toddler sent me this message last week. “Figuring out how to participate in these movements for change during this pandemic with a young child is overwhelming. Most days we are just wrestling with screen time, Cheerios, and sharing toys. It’s so painfully mundane compared to what’s happening in the streets.”

Our children are growing up with a contemporary set of feminist movement builders to learn from, study, and follow. The impact of Black leaders like Alicia Garza, Patrisse Khan-Cullors, Opal Tome (co-founders of #BlackLivesMatter), Tarana Burke (#MeToo), Kimberlé Crenshaw (#SayHerName), and Milan Nicole Sherry (#BlackTransLivesMatter) along with countless others have shifted the stories, politics and possibilities about race and gender for all children.

It’s true that activism at the intersection of race and gender is most visible right now in the streets and online. The invitation, however, is for all of us to commit or re-commit to identifying and rooting out all the places where racism, sexism, gender bias, and transphobia live in our beliefs, homes, relationships, and institutions. In other words, parenting is an essential part of these movements.

Parenting young children involves so many things – from the mundane rituals of handing them a bag of cheerios to the profound responsibility of handing them stories, experiences, understandings, and possibilities.

Starting out right away, babies and toddlers are learning about the world and wondering “What is important here?” It doesn’t take long for them to learn that race and gender matter. Dr. Jacqueline Dougé, an author of the American Academy of Pediatrics statement on the impact of racism on child health, reminds us that toddlers are already making observations and organizing their world based on things they can see. They learn quickly that some categories matter a lot more than others, with race and gender at the top of the list because they are constantly cued to their significance. For example, most adults start teaching binary categories right away by labeling things and activities as either “boy” or “girl” over and over again throughout the day.

Once children learn to pay attention to these categories, they start actively seeking clues about what their gender and racial identities and possibilities mean. They are linking their own feelings and experiences with observations of what they see around them, what they guess to be true, what they absorb in the toy aisles, what they see on screens and in books, and what they experience with family and friends. In the absence of explicit conversations and experiences that disrupt rigid gender roles and racial bias or that nurture gender freedom, anti-racism, or cultural pride, children quickly draw conclusions that conform to stereotypes. The stakes are high. Children as young as four years old show clear biases at the intersection of race and gender. Notably, children’s responses to Black boys were less positive than to Black girls, white boys or white girls. In other words, race and gender bias are already entangled before elementary school.

“Did you know that women used to have to make coffee for their husbands EVERY MORNING?” my nephew asked my sister-in-law after watching an old advertisement from the 1950s in health class. Incredulous and before she could respond, he was quick to say “I mean, why doesn’t he make it HIMSELF if he cares so much about it??”

My nephew’s quick analysis of this commercial was adorable and comforting. We have certainly come a long way when a ten-year-old is quick to point out the egalitarian solution to morning routines.

Yet celebrating “how far we’ve come” masks the alarmingly persistent realities of gender bias and rigid gender roles among young people. Here are some verbatim responses from a survey of adolescents called “The State of Gender Equality for U.S. Adolescents.” 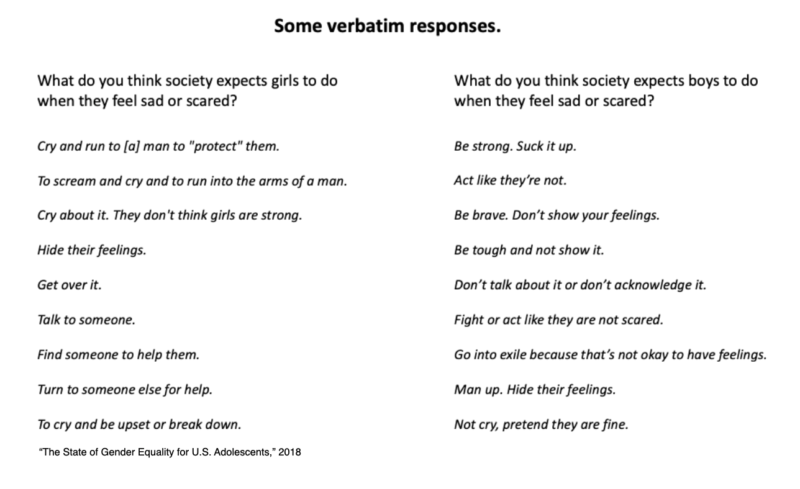 There is plenty of evidence that the rigid gender binary and racialized gender bias are alive and well in the United States. For example, Harvard’s Making Caring Common Project recently found that teenagers were most likely to give more power to the school council if it was led by white boys. The same study found that forty percent of teens who identify as boys and twenty-three percent who identify as girls prefer male over female political leaders. Of course these data aren’t just about political aspirations or electability. A recent poll found that seventy two percent of boys say they personally feel pressure from parents, teachers, or society to be physically strong and less than half of boys and men with mental health challenges seek help.

The stakes of rigid gender roles are high.

Unfortunately for our kids, gender bias and rigid gender norms don’t just limit how they think about the world and its possibilities. It has a clear impact on their health and safety.

A mountain of research has found that when young people internalize narrow gender norms, they have lower outcomes related to mental and physical health, education, and economic security. In 2018, the American Psychological Association issued ten new practice guidelines for working with boys and men in response to the toxic effects of “traditional masculinity ideology” on their mental and physical health. If long term health outcomes don’t motivate us, research also shows that traditional masculinity is linked with attitudes that are more tolerant of dating and gender violence in early adulthood. Finally, gender creative or transgender kids too often experience exclusion, bullying or violence for transgressing rigid ideas of what it means to be a boy or a girl.

Children are absorbing the lessons of gender and race early and often. As developmental psychologist and gender researcher Rebecca Bigler notes, “If adults don’t explain why differences exist, kids make up their own explanations.” Here are just a few ways to get started with young children:

Let’s partner with our kids to build new understanding and skills.

Clearly talking early and often is key. But so is playing, practicing, and exploring. Research shows that it is not enough just to show children expansive gender roles and diverse characters in books and shows and hope they absorb the lessons. Instead, we need to talk in age appropriate ways about racism and sexism and engage our kids as active learners. For example, simply studying the biographies of famous people of color does not do as much to improve racial attitudes as learning about the racial oppression and resistance experienced by those same heroes.

Dr. Bigler ran an interesting school-based experiment that points to what it actually takes to prepare children to confront bias. She found that with children in early elementary school, reading stories about interrupting sexism was not as effective as actively teaching the same interventions. For example, she actively engaged one group of children to spot six different ways sexism shows up (things like “girls can’t play this game!”) and then rehearsed and role-played six different memorable responses (things like “You can’t say, girls can’t play!”). This group of kids was far more likely to actually confront sexist dynamics on the playground than the children who were read to.

At home, these lessons might sound a little different and they don’t happen in one sitting. They don’t happen in a lecture. They look different in each of our households depending upon our culture and our identities. They happen over Cheerios, through screen time, and in conversations about sharing toys. They happen when we partner with our kids in both mundane moments and in building movements.